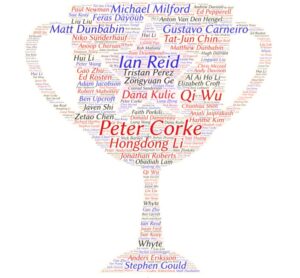 Over the last six years the work of the Centre and its researchers has attracted significant and sustained recognition, often acknowledged through the receipt of awards, funding grants, fellowships and promotions.

We’ve had twelve Best Paper awards including the prestigious Koenderink Paper Prize in 2016.  One DECRA Fellowship and five Future Fellowships. Numerous Centre researchers have been invited to become Fellows of prestigious entities such as the Australian Academy of Science, the Australian Academy of Technology and Engineering, the Institute of Engineers, the Royal Academy of Engineering, the Asian Federation of Computer Vision and the Institute of Electrical and Electronics Engineers.  Our people have also received two Best Reviewer awards and two Outstanding Reviewer awards.

International recognition has also come in the form of the Humboldt Research Fellowship, Wharton-QS Stars Reimagine Education Award, the MIT Technology Review Innovator Award and the RA McLachlan Award by the Engineers and Geoscientists of British Columbia. We have also had recipients of the NVIDIA Pioneering Research Award, a Google Faculty Research Award and a Google Impact Challenge People’s Choice Prize.

Closer to home our researchers have received first place in the VQA 2.0 Challenge, the Amazon Robotics Challenge and the Visual Object Tracking Challenge in both 2015 and 2016.  Centre researchers have received the CSIRO Science Excellence Medal, the CSIRO Digital and National Facilities Science Excellence Award, the Batterham Medal from the Academy of Technology and Engineering, an Australian Academy of Science J.G. Russell Award, an Australian Teacher of the Year Award and named Australian Academic of the Year at the Australian Defence Industry Awards.

One of our robots has also taken out three awards at the 2019 Good Design Awards and one of our researchers made Robohub’s global list of ‘30 women in robotics you need to know’. We’ve also had two Young Tall Poppy of the Year recipients, won the South Australian Science Award for Excellence in Research Collaboration and had a state finalist for Australian of the Year.

We’ve had a ‘Superstar of STEM’ who was also recognised in the Courier Mail’s ‘Power 100 list’ for putting robotics on the map in Australia.  A member of our Centre Advisory Board received the MA Sargent Medal by Engineers Australia’s Electrical College Award and another was made an Officer of the Order of Australia.

Our four Australian partner universities have recognised the talent of our people through 19 promotions, a number of awards for Excellence and Outstanding Performance and a Deans Commendation for Doctoral Thesis Excellence.

That is quite the record team. It is really important to talk about your success and be proud of it! This will be something you can all point to and say I was a part of.

Also I just want to touch on personal observations…

Australians shy away from talking about their success because of Tall Poppy Syndrome.

According to the 2018 CGU Ambition Index, 75% of Australians say they are ambitious, but only 6% say ambition is our greatest asset. Based on this survey, 68% of Australians believe that Australia has a culture of negativity towards ambition with nearly 7 in 10 surveyed reporting they don’t talk about their ambitions for fear of being labelled a ‘bragger’. Up to 9 million Australians have thought about starting a business, but just over 6% have actually done it. In other words, our attitudes towards ambition are stopping people from becoming entrepreneurs.

So always go for the awards, media coverage etc. Be super proud of what you do. If you want to do a start-up go for it. One of my personal goals is to shine a really positive light on amazing people – I’ve done this through http://www.thebrilliant.com.au – in the hope of doing what i can to encourage innovation. I am super proud to have been a tiny part of this amazing centre.

When you see it all written down like this it is just amazing. So proud to have been part of this!

I remember when the team won the Amazon Robotics Challenge and thinking, wow, I am part of this amazing Centre…I just thought it was incredible and I was so proud of them!