In partnership with Queensland Department of Transport and Main Roads ACRV used an ITS-teched-up Renault ZOE as part of the ‘Connected and Highly Automated Driving CHAD Pilot’ iMOVE project.

In collaboration with the Queensland Government and mining equipment manufacturer Caterpillar, Centre researchers received $428,240 in funding to develop technologies that would ultimately enable the automation of underground vehicles. 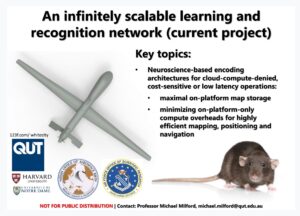 Between 2018 – 2020, the Asian Office of Aerospace R&D, as part of the US Air Force’s Office of Scientific Research, funded a research project investigating how neuroscience could inspire new data compression methods for robot and drone localisation and mapping systems.  With partners from Harvard and the University of Notre Dame, the project investigates how neurons in the brain underlying tasks like navigation can be modelled to create new methods for highly efficient robotic mapping and localisation systems.

Pepper in the Clinic Project 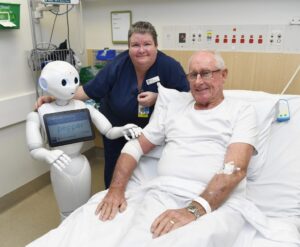 In 2018 the Centre’s social robotics team supported a trial of the Pepper robot at Townsville Hospital and Health Service. The team developed two applications for this trial. One involved Pepper acting as a concierge in the Emergency Short Stay Unit providing answers to frequently asked questions. The other involved Pepper standing in the main foyer area asking people about their attributes to flu vaccinations, and providing public health information about the virus, vaccination, and the importance of practices like hand hygiene in preventing the spread of disease. 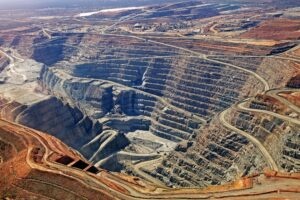 In a multi-continent collaboration led by the University of Essex, University of Nevada and Centre researchers are developing techniques for Visual Place Recognition for Robotics in Extreme Environments.  Funded by the UK’s National Centre for Nuclear Robotics and the Engineering and Physical Sciences Research Council, the project has a number of target domains including underground exploration and mining as well as nuclear decommissioning scenarios. 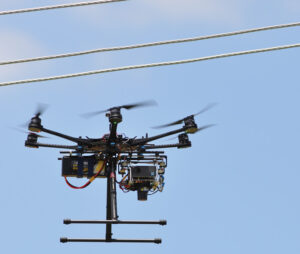 Centre members were part of the research team that developed a 20-month rapid proof of concept program to address key operational safety issues in the routine use of drones for aerial robotic inspections.  This enabled power lines to be tracked, ascended, orbited and followed without user intervention.