Autonomous underwater vehicles (AUVs) are increasingly being used for underwater surveys and to investigate archaeological finds.

The accurate estimation of pose and velocity of an AUV is critical to ensure the repeatability and validity of scientific data that is captured using sensors on board the AUV. A low-cost and effective way is by using stereo camera sensors to perform visual odometry (VO). However, this is a difficult problem underwater due to poor imaging condition and inconsistent motion caused by water flow. This project created a robust and effective stereo underwater VO system that can overcome these difficulties and accurately localise the AUV. Experimental results demonstrate that the proposed pipeline outperforms existing VO systems in underwater environments, as well as obtaining a comparative performance on the KITTI benchmark dataset.

As is shown in Fig.1, the imaging conditions in water are poor due to light attenuation, poor/artificial illumination, haze and scattering. When the AUV operates in shallow waters, scattering of the sun light is highly problematic. Motion blur can also be present and is due to motion of the robot while the camera shutter is open. The vehicle/camera’s motion is inconsistent with oscillation, especially in shallow underwater areas, due to the water waves. All these problems greatly increase the difficulty in estimating the robot’s location.

We extensively tested and evaluated possible solutions and proposed a stereo underwater VO system that is able to robustly and accurately localise the AUV. Our system is built upon a popular visual-based localisation system in robotics called ORB-SLAM2. We carefully modified this system to accommodate challenging conditions and demonstrated that the proposed pipeline outperforms existing VO systems in underwater environments (see Fig.2 ). 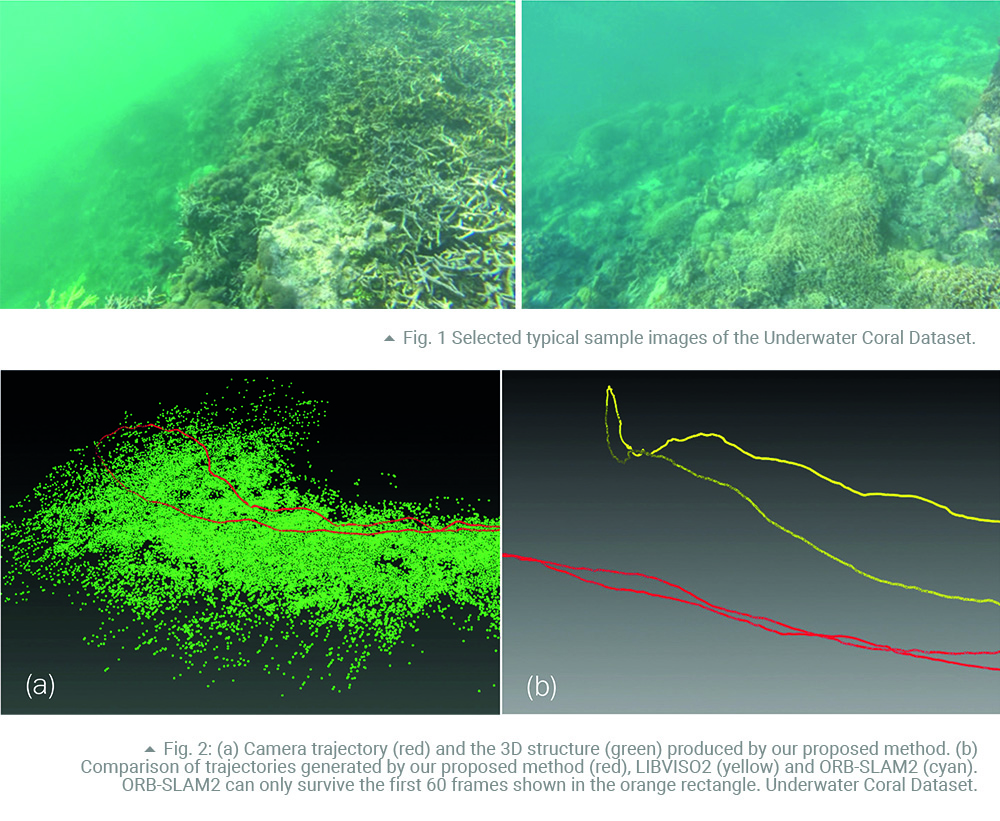